Building the Largest Independent,
Family-Owned Bourbon Distillery
in the World

The traditional methods used here are the same as those of the company's first plant, the Heaven Hill Springs Distillery in Bardstown, KY, roughly 45 minutes away. The Shapira brothers, who cofounded the distillery in 1935, could not have imagined owning a distillery like Bernheim. And given the unfortunate circumstances leading to its purchase in 1999, none of them would have wanted to.

But as fortune favors the bold, so does the art and business of making whiskey, and a curious order of events eventually led to Heaven Hill creating the single most productive Bourbon distilling operation and second largest inventory of aging whiskey in the world.

In the middle of the Great Depression, cash was scarce and economic confidence was low. But post-Prohibition America was still thirsty for great whiskey, and Bardstown had loads of distilling talent. Combining the two made an obvious business opportunity.

In 1934, a group of investors approached Mose, George, Gary, David, and Ed Shapira with an opportunity to create a distillery. Their proposition was simple: If the Shapiras— who had built their business acumen as department store retailers—would contribute $17,500 in start-up capital, the operating group would invest an equal amount and run it. The deal was sealed, and the original Heaven Hill Springs Distillery was built.

The Origin of the Name

The original distillery was built on acreage in Bardstown owned by a man named William Heavenhill. According to president Max Shapira, the story of how Mr. Heavenhill's name was divided into its current form comes down to a typographical error made on paperwork sent to state officials in Frankfort. When told it would cost $10 to return the name to Heavenhill, it was deemed unnecessary and the misspelling remained.

The modest wood frame distillery used coal to heat the boiler, which cooked its mashes and sent steam surging through its all-copper column still. The first barrels were filled on December 13, 1935, but it wouldn't be until four years later that the liquid inside was properly aged and the owners released their namesake whiskey: Old Heaven Hill Bottled-in-Bond Bourbon.

When you're in the business of making products that you can't sell for four years or longer, it takes patience and perseverance.

"When you're in the business of making products that you can't sell for four years or longer, it takes patience and perseverance," said Max Shapira, son of Ed Shapira. "Fortunately, my dad and uncles had their retail stores for income, so they could afford to wait."

Unfortunately, their operating partners couldn't. Needing cash, they asked the Shapiras to buy them out for $20,000 in 1937. Suddenly and unexpectedly, the Shapira brothers were forced to gauge the seriousness of their commitment to the distilling business.

"We always joked that my father didn't know a barrel from a box, but he and my uncles believed they were involved in a good business that had potential," Shapira said. "So, they bought out their partners… I'd say that risk turned out pretty good for them." 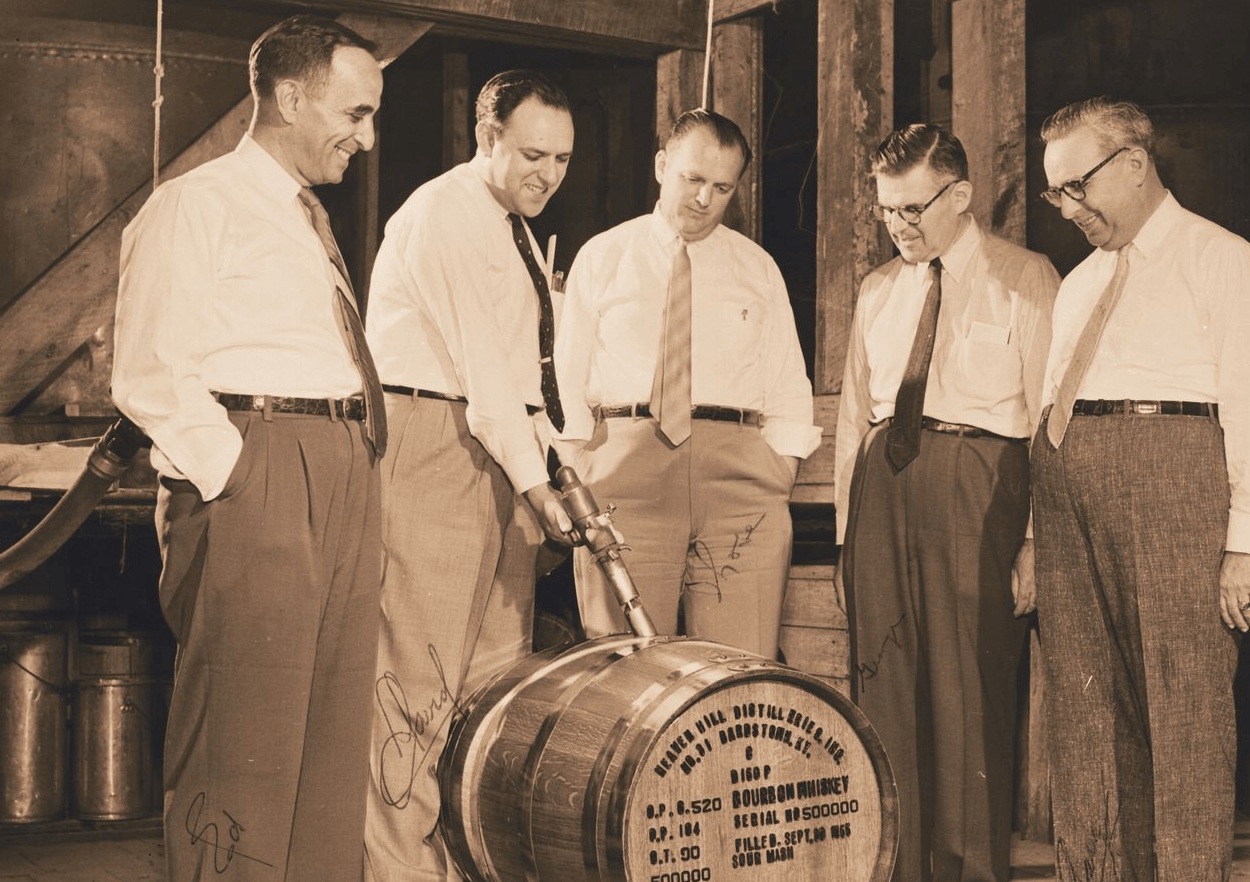 From the beginning, members of the renowned Jim Beam Bourbon-making family oversaw the distillation process. In 1935, it was Joe and Harry Beam who brought their knowhow and set the standard for quality. In 1946, Ed Shapira signed Earl Beam to the job of Heaven Hill Master Distiller. Earl would spend 29 years in the post, helping Heaven Hill establish its distilling legacy.

During that period, as Old Heaven Hill Bottled-in-Bond became Kentucky's number one-selling Bourbon, Earl Beam expanded operations to match the distillery's steady growth. Capacity increased and additional rickhouses were built to house those full barrels. With such steadily growing stocks, Heaven Hill could begin to extra-age some of its Bourbon.

Beam's guidance and vision for the distillery helped Heaven Hill become an American spirits powerhouse. Upon his retirement in 1975, he handed the reigns to son, Parker, who spent the next several decades creating new Bourbon brands such as Elijah Craig, as well as single barrel and long-aged releases of Evan Williams and Henry McKenna. He was determined to continue making and aging premium whiskey, which would later reap great rewards for Heaven Hill.

But before those happy days arrived, the distillery would endure unimaginably difficult years.

A River of
Flaming Whiskey

Nov. 7, 1996 provided such an event, and a cold front lashed Central Kentucky with storms. According to Charlie Downs, distillery supervisor at the time, an employee reported smoke coming from Warehouse I at 2 p.m. Downs and Parker Beam hopped inside Beam's truck and drove up the hill from the distillery to look for themselves. When they saw the smoke, they immediately ordered an evacuation.

"By the time we got everything turned off, flaming whiskey was coming down the hill, over Highway 49 and toward the distillery," said Downs, who retired in 2018 as artisanal distiller at the Evan Williams Bourbon Experience in Louisville. "At that point it wasn't safe to exit through the front of the distillery building. We had to go out the back."

As 70 mph winds gusted, flames from Warehouse I spread to nearby rickhouses. Though Bardstown's fire department had arrived quickly, Downs said putting out the raging inferno was impossible. The firefighters' only choice was to go on the offense and pour torrents of water on nearby rickhouses to keep them cool.

"But they could hardly do that either because flaming whiskey was flowing everywhere, and wood embers (from burned floors, barrels, and ricks) were flying to other buildings," Downs said. While burning alcohol doesn't produce a visible flame, Downs said the heat was so intense that the air shimmered all the way to the sky.

As more rickhouses up the hill from the distillery succumbed to the flames, barrels began to explode and sent a widening river of burning spirits down the hill and into Rowan's Creek. The shallow creek quickly overflowed and flaming whiskey spilled onto the highway, melting the asphalt on its way toward the production plant.

By evening, the distillery and seven rickhouses were destroyed or still aflame. Finally, around 8 p.m., the winds calmed and shifted the flames away from other rickhouses. The worst was over. Fortunately, there were no fatalities or injuries.

Lightning is suspected to have caused the fire, but no one saw a strike. It could never be proven since the blaze had incinerated the evidence.

The Aftermath
of the Fire

Jodie Filiatreau was one of hundreds of Heaven Hill employees called to a meeting at the company cafeteria the next day. As a warehouse supervisor, Filiatreau had done some grim mental accounting before he arrived: seven lost rickhouses meant at least fifteen percent of the company's storage capacity was gone.

"I was worried going into that meeting," said Filiatreau, who became the artisanal distiller at the Evan Williams Bourbon Experience when Downs retired in 2018. "But they said nobody was going to lose their jobs, and they wanted everybody to come back to work."

Max Shapira became Heaven Hill's president that year, facing a challenge never endured by his relatives. Though unsure of where exactly to turn next, the employee turnout and spirit in the cafeteria that morning gave him confidence that the company would recover.

The total loss of in whiskey and facilities was later
valued at $30 million.

"Losing 92,000 barrels of whiskey is a lot to lose, but at least it was far from all we had," Shapira said.

"But, we decided it was going to be business as normal—as normal as it could be.

The bottling facility was up and running the next day and our whiskey was being shipped to our customers.

We were still in business."

Over the next few days, Shapira took calls from competitors asking what they could do to help the distillery stay on its feet, including helping Heaven Hill produce its signature mashbill to be aged in the company's own barrels and rickhouses. Over the next several years, multiple companies would help Heaven Hill distill its spirits.

This is an unusual industry. When there are problems, we work together to solve them.

"This is an unusual industry," Shapira said. "When there are problems, individually or collectively as an industry, we work together to solve them. This was a time when somebody could have said, 'Oh, let them sink or swim on their own, they're a competitor.' But they didn't. And that shows just how remarkably close this industry is."

In order to make that Bourbon, Heaven Hill's yeast needed be recovered. The entire supply of yeast — a propriatary recipe that had been handed down for generations and fermented the first batch in 1935 — was kept in the distillery. Though badly burned, the distillery building wasn't destroyed completely, and Downs and Beam rented a bucket lift to see if they could get to the fifth-floor yeast refrigerator.

"And when we opened the door, we couldn't believe it! There it was, still cold!" Downs recalled. "We immediately took it to a few 'safe locations' where it could stay alive." The most secure spaces? The refrigerators in Charlie and Parker's own kitchens. 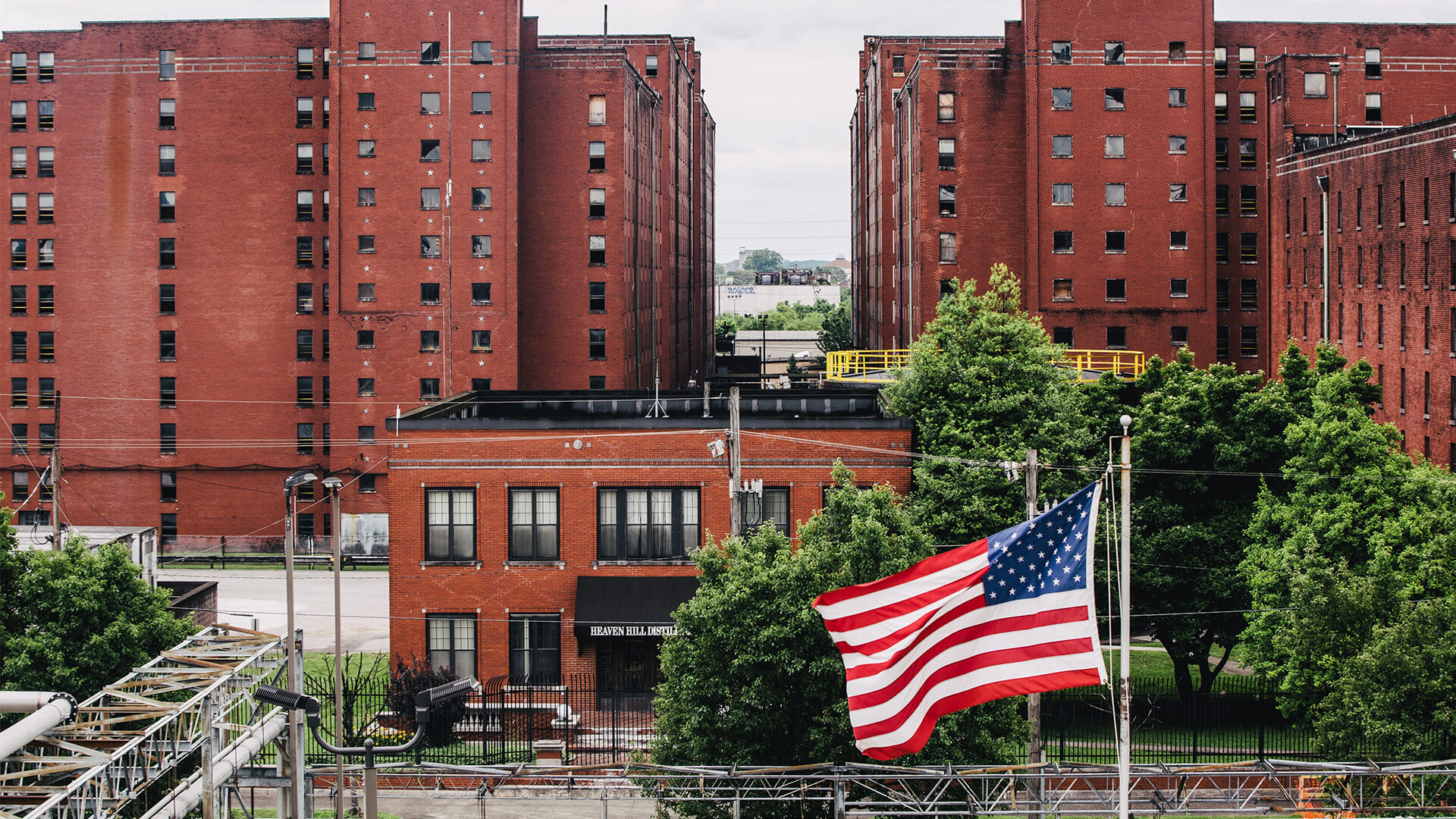 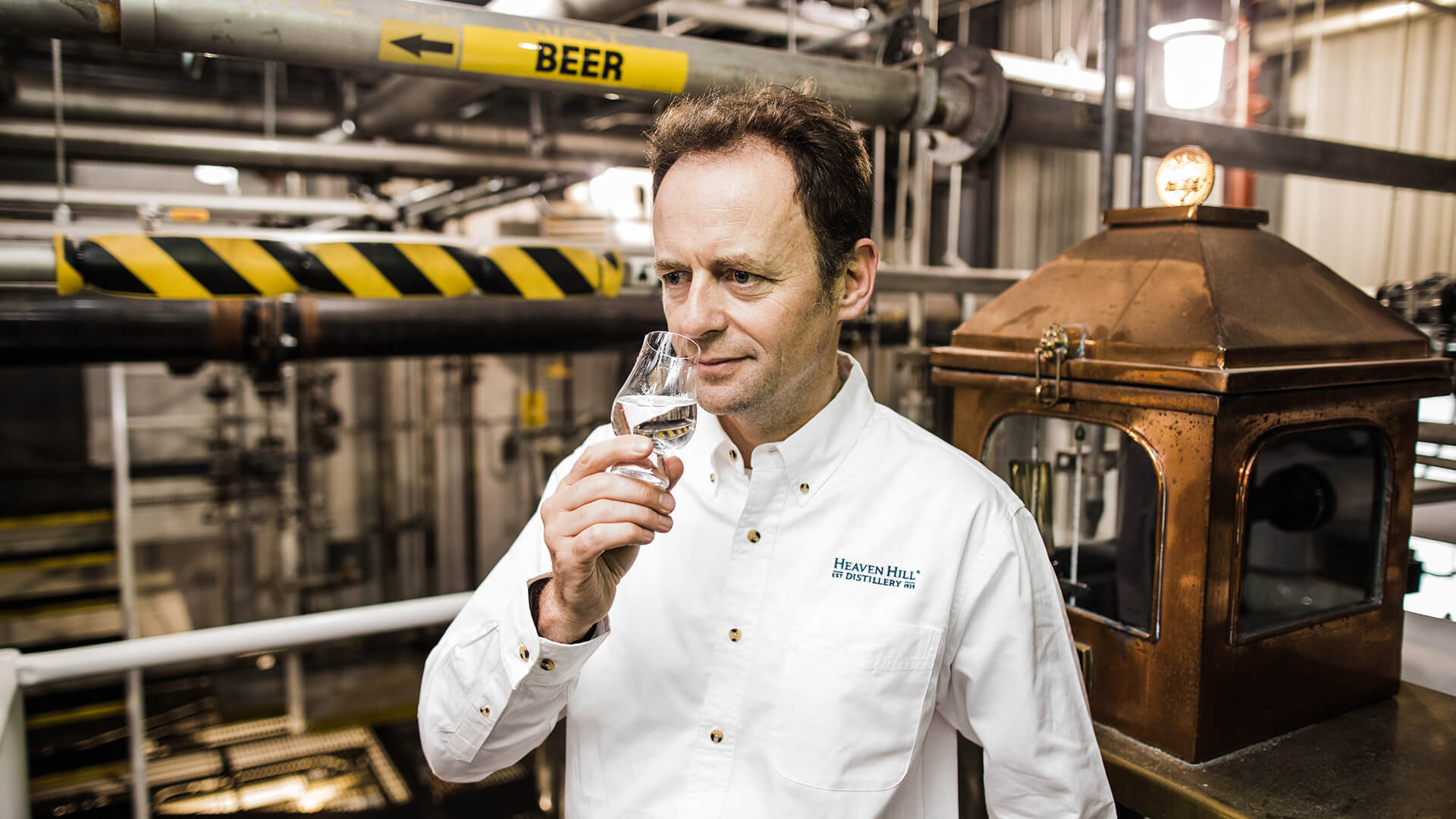 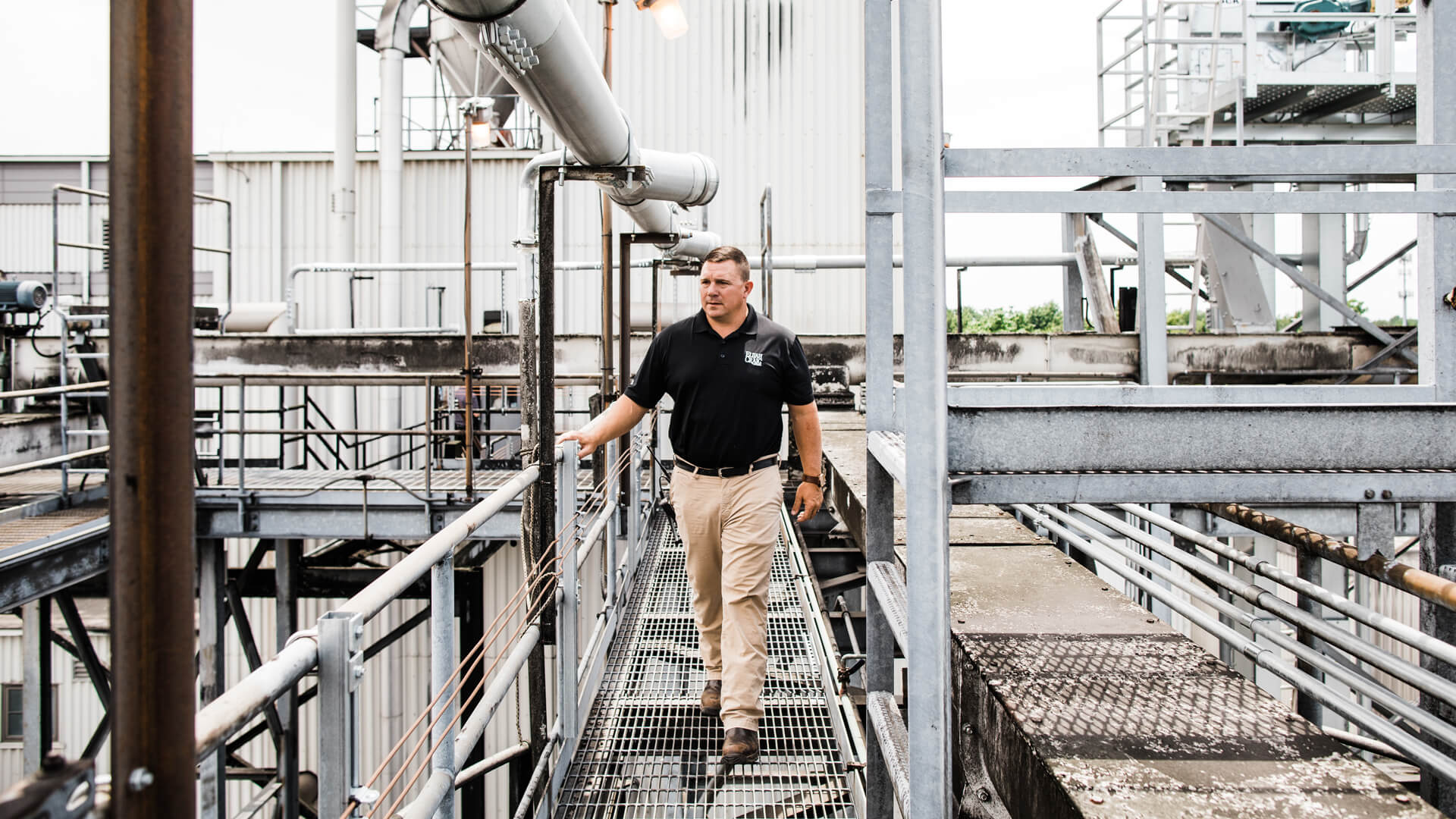 From Bardstown
To Bernheim

As Heaven Hill's recovery continued, the Shapiras weighed the benefits of building a new distillery or buying an existing plant. Either way, Shapira wanted Heaven Hill to return to distilling its own goods. In 1999, United Distillers, owner of the Bernheim Distillery, contacted Heaven Hill about a possible sale of their plant.

Heaven Hill decided to go for it and the sale closed later that year. Parker Beam set about redesigning the facilities, including adding copper—the ideal metal for removing sulfurous notes from whiskey. Beam believed that adding even more copper to the existing stainless steel and copper stills would yield distillate as clean tasting as that made in Bardstown prior to the fire. So, he had each of its two doublers packed with copper mesh to increase important contact with the whiskey.

"That was such a cool distillery at the time, fully automated and streamlined," Downs said. "Moving from the antiquated system we had in Bardstown to that modern system was like riding on a rocket ship to the moon."

Bernheim's capacity was roughly triple that
of the Bardstown location.

In 2007, when the Bourbon renaissance was moving
into high gear, Heaven Hill doubled the fermentation
output to yield 200,000 barrels annually.

Seven years later, four more fermentation tanks
were added along with a third work shift,
and production rose to 300,000 barrels.

When it became clear there was no end to the American Whiskey
boom in sight, a third 70 ft column still and four more fermenters
were added, boosting annual production to 400,000 barrels.

"The fire taught us a lot of tough lessons. But the safety systems we have in place now will ensure what happened then won't happen again," says Mike Sonne, Heaven Hill's process engineer. 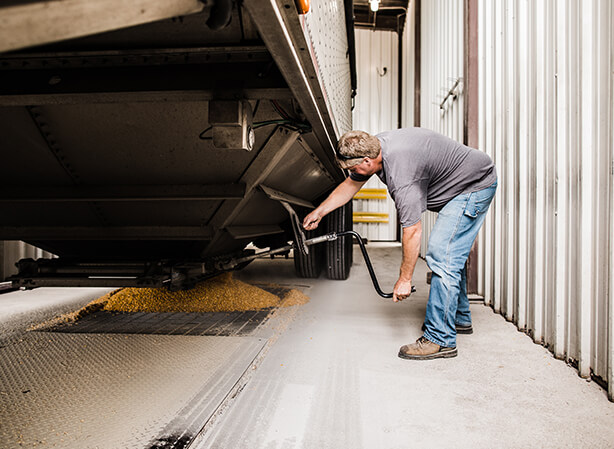 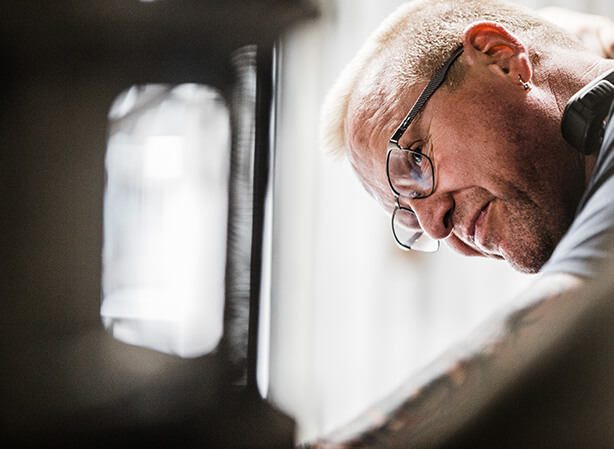 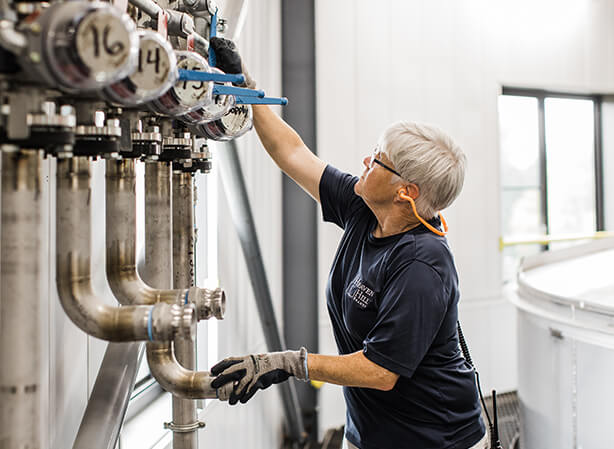 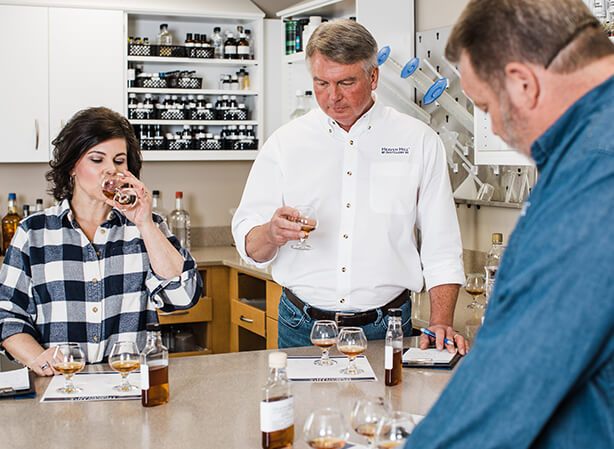 When asked what his dad and uncles would think of the Heaven Hill they created when compared to the company as it is now, Max Shapira grinned, paused a moment, and grinned again.

"If you told them back then, they would say, 'Oh, that'll never happen,'" he said with a wave of his hand. "Even when I came to work for Heaven Hill, Wall Street thought the Bourbon industry wasn't a good place to put money."

Given all the risk in our history, we're pretty fortunate with how things turned out.

"If you want to know the truth, I might have said the same thing. Nobody plans on having their distillery burn down in order to get a bigger one. But that's the way it happened, and at just the right time before the boom hit. Given all the risk and unforeseen circumstances in our history, I'd say we're pretty fortunate with how things turned out."

Join the Bourbon conversation and get in-depth whiskey knowledge delivered right to your inbox.